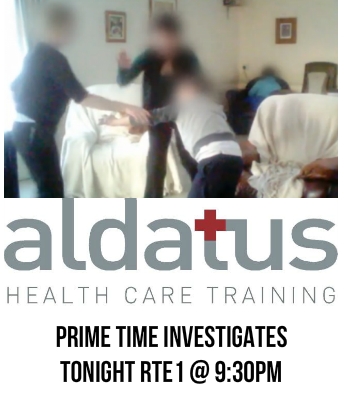 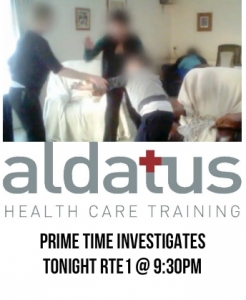 Tonight after the 9 O Clock news RTEs Special Investigation Team will be rolling out another of their Prime Time Investigates Programs, giving the viewer in the comfort of their armchair a shocking insight into what has being going on in a HSE run residential and respite centre in Swinford in Co Mayo.

IN WHAT’S ONE of the most disturbing scenes in tonight’s shocking Prime Time investigation into the treatment of residents at Mayo’s Áras Attracta, 53-year-old Ivy McGinty is repeatedly denied use of the bathroom by a staff-member.

“If you died Ivy, I wouldn’t bring you to the toilet,” the care worker tells the distressed resident, who — unable to speak — tugs and pulls at her clothes to communicate her needs.
The staff member tells her colleagues not to bring Ivy to the toilet either.
The frustrated resident — as another way of signaling her needs — holds out a pair of rubber gloves.
But the gloves are repeatedly thrown on the ground by unconcerned staff-members, as Ivy is shooed away. One worker swipes at her head with a ring-binder, as the confused resident paces back and forth between the women tasked with her care.
In another scene, Ivy is dragged along the floor after being denied permission to sit on her favourite chair.
And on another occasion, the 53-year-old — who has severe intellectual disabilities — is struck by a worker and told:

The Gardaí and the HSE confirmed last week that they were investigating the activities of staff members at the Swinford residential care home.
Some details of the alleged abuse suffered by women at the home also emerged last week — that they had been slapped, force-fed and otherwise mistreated.

The full extent of those claims will be detailed in full this evening, as RTÉ broadcasts ‘Inside Bungalow Three’ — the exposé compiled by its Investigations Unit.

It goes out tonight at 9.35pm in the usual Prime Time slot